If you are a totally scaredy cat (like myself) then the film will be a scare fest. If not then you should appreciate the anecdotes from the original film, and the class acting that keeps the plot close to the book. Fans can also look forward to part two which seems to be a close kept secret but could come out as early as next year.

Bill Skarsgard (‘Pennywise/It’) certainly has the head angle on point for those creepy eye close-up scenes. But you can definitely see why horror fans don’t find him as scary as Tim Curry’s version. The computer-generated image of sharp teeth and large mouth in some scenes looks pretty overdone which distracts from the class of the guys acting. Maybe it’s just me and my love for 90’s horror?.

That said, keeping with the original film so closely made it a good watch. Comparisons can be made but ultimately this revamp hits the spot and adds comedy which is definitely needed if you take a person who is easily scared. Or they will inevitably end up hiding behind you/their hand…. which obviously did not happen to me.

We are left howling at Richie’s one-liners and classic adolescent jokes. Finn Wolfhard (Stranger Things) portrays the geeky school kid well, as do all the young actors. Also, those glasses are, quite frankly, adorable. 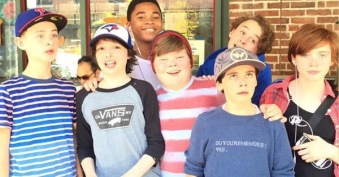 **Spoiler Alert: They all look even cuter and geekier in costume.**

We also can’t help but feel a soft spot for the romance and love-triangle between Bill, Ben and Beverly it is as cute as the original. Maybe more so because the actors seem to have a real bond in this revamp.

Overall, the scariest parts were the unnecessarily huge forehead of Pennywise, his shape-shifting and that photo of the woman…. oh and the depths of that well. *Shudders*

Let me know what you think in the comments below.