Where did Valentine’s Day come from?

V- Day is just around the corner, but do you know who Saint Valentine was? What he did? What led to Valentine’s Day? No, neither did I until I started having a Google.

Saint Valentine could have been one of several people.  Infact, the Catholic Church recognises three different saints named as Valentine or Valentinus, all of whom were martyred.

Most people believe that he was a Roman Priest who was around in the 3rd century. And died in around 270AD.

He is famous for allowing young people to marry against the wishes of Emporer Claudius II, who thought that single men made better soldiers.

Unfortunately, because of this he was sentenced to death, we think this happened on the 14th of February, so technically were celebrating a death. Just let that sink in.

Others believe that the church decided to place the big day on the 14th to coincide with the feast day of the pagan festival of Lupercalia. 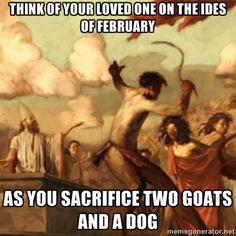 Lupercalia was a festival of fertility dedicated to the Roman God of Agriculture. Some very strange rituals were performed. I can’t say I wouldrecommend you slap the head of an animal on your significant others bottom on the ‘most romantic day of the year’.

The most common Valentines presents are cards, chocolates, lingerie or sweet treats, but roses are the most linked to tradition.

Apparently Venus, Roman God of Love, had a preference to red roses, and that’s why they’re a staple now.

Despite Saint Valentine dying in the 3rd century, it wasn’t widely celebrated until the 5th century. It was held as a day of fertility as per Lupercalia and not a day of love.

Maybe just go with the traveling part of that present wise?